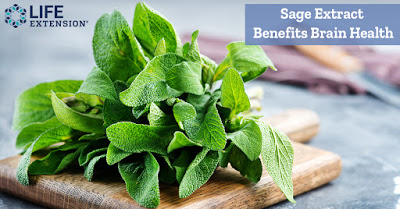 “Sage” describes an individual (usually older) who is revered for their wisdom and intelligence. It may be no coincidence that the herb sage is known to benefit the brain, the seat of these attributes. For some sage advice regarding Salvia officinalis and cognitive function, read on or listen to the Live Foreverish Podcast episode.

“Salvia officinalis L., also known as the ‘salvation plant,’ has been long used and well-documented in traditional medicine around the globe,” wrote Martina Jakovljević and colleagues in a recent review. “Its bioactive compounds, and especially its polyphenol profile, have been extensively researched and reviewed. However, sage’s beneficial effects reach much further, and nowadays, with a range of new extraction techniques, we are discovering new components with new therapeutic effects, especially in the context of neurodegenerative diseases. ”1

Old European medicinal herbalists document specific plants, including sage, as having memory-boosting effects. The validity of this traditional usage has been borne out by modern research that has discovered the herb’s cholinergic property, which is an ability to enhance or imitate the action of acetylcholine, a hormone that facilitates the transmission of nerve impulses.2 In a recent article, Nicola T. J. Tildesley and associates noted that “Members of the sage family, such as Salvia officinalis and Salvia lavandulaefolia, have a long history of use as memory-enhancing agents coupled with cholinergic properties that may potentially be relevant to the amelioration of the cognitive deficits associated with Alzheimer’s disease.”3

Acetylcholine is a neurotransmitter involved in learning, short term memory and attention.4

Neurotransmitters, simply put, are chemical substances that facilitate the transmission of impulses from one neuron to another or to muscle or glandular cells. The space in which this transmission takes place is known as a synapse.

The nutrient choline, formerly categorized as a member of the vitamin B complex, is necessary for the formation of acetylcholine. Choline is found in foods such as egg yolk, fish, poultry, whole grains, and some beans, nuts, fruit and vegetables, as well as in nutritional supplements. Choline is also produced in modest amounts by the liver.

One of many explanations of the development of Alzheimer’s disease is the cholinergic hypothesis, which posits dysfunction or loss of the brain’s cholinergic neurons (which contain acetylcholine and secrete it into the synapse) as a major contributor to the disease.5

A review of investigations of the genus Salvia’s cognitive enhancing and protective effects noted that extracts of Salvia officinalis decreased acetylcholinesterase activity in vitro and in mice, in addition to demonstrating an antioxidant effect and an ability to support a healthy level of inflammation.6

A randomized, double-blind, placebo-controlled crossover trial evaluated a proprietary standardized sage extract in participants over the age of 65. 7 Cognitive assessments were administered 1, 2.5, 4 and 6 hours following treatment. Treatments were rotated so that each participant received one of four different doses of the extract or the placebo during each of five study visits. Compared to the placebo, which was associated with a decline in performance, secondary memory performance (word recognition, picture recognition, immediate word recall and delayed word recall) was significantly enhanced at all time points following the administration of a 333 milligram daily dose, and was improved to a lesser extent in association with the other doses. Assessments of attention also revealed improvement in association with 333 milligrams of sage extract. Analysis of the extract in vitro confirmed its cholinesterase-inhibiting property. “The results of the current study demonstrate a significant acute improvement of cognition following the administration of sage, with particular benefits for secondary memory,” authors Andrew B. Scholey and colleagues reported. “This is a very favorable response profile as memory impairments are the core deficits of mild cognitive impairment and early Alzheimer’s disease. In contrast, existing anti-dementia treatments have a primary effect on attention and only a secondary benefit on memory. Sage therefore has potential as an agent not only for general enhancement of cognition in older people, here using a well-controlled trial and extract with established cholinesterase inhibition, but also in Alzheimer’s disease either alone or as an adjunct to more conventional therapies.”

In other research, the proprietary extract revealed an association with increased lifespan in roundworms.8 The effect may be related to this extract’s ability to increase the expression of lipid metabolism and insulin signaling genes.9

In a trial that involved women with mild to moderate Alzheimer disease, an extract of Salvia officinalis given for 16 weeks resulted in better cognition and less agitation compared to a placebo.10

A double-blind crossover study that included 30 young, healthy participants resulted in improved mood in the absence of a stressor and better task performance in association with the intake of 600 milligrams per day of dried sage leaf.11

Sage contains polyphenols that include flavone glycosides, rosmarinic acids and rosmarinic acid derivatives, among other compounds.13 Increased polyphenol consumption has been associated with short-term benefits to brain function and long-term brain health.14 Rosmarinic acid in sage and other herbs has been found to inhibit the aggregation of amyloid beta, a protein that forms damaging clumps in the brains of Alzheimer’s disease patients.15 It has also been demonstrated to reverse tau phosphorylation (which plays a role in Alzheimer’s disease) induced by stress and aging in mice.16

The wisdom of the past has found validation in these and other studies that reveal a memory benefit for sage. Sage’s long history of use in food and as medicine and the data revealed by recent studies make sage supplementation a safe and effective means of enhancing cognitive function among healthy people and potentially improving cognitive impairment in older adults.