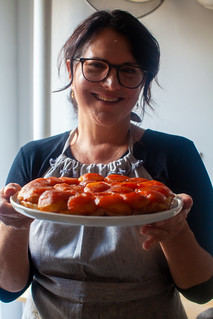 [Welcome to the second episode of the Sous-Chef Series, a sporadic feature on SK in which I invite cooks I admire over to my small kitchen to teach me — and thus, us — to make one of their specialties. Spoiler: I’m the sous! Previously: Making potato vareniki with Kachka’s Bonnie Frumpkin.]

Almost without fail, the more bafflingly short an ingredient list and the more stunningly delicious the outcome, the more likely it is to rivet me. I don’t need all recipes to have 5- or 10- or fewer ingredients — I fare poorly under arbitrarily restrictive confines — but doesn’t it just blow your mind that you can make the apple tarte tatin above with only apples, sugar, butter, lemon juice, and a sheet of defrosted puffed pastry?

Or, you should be able to. When made well, this upside-down apple tart looks like snug copper cobblestones on top of a rippling puff of flaky pastry. If you’re lucky, the apples will taste like they drank a cup of caramel and then napped in what they couldn’t finish. I love it enough that I’ve written about it twice (!) in eleven years but my efforts were… mediocre at best. I mean, just look at them — too thin, too sparse, too pale, apples either under- or overcooked, and way too many apples have dissolved long before the cooking time should have been up, despite being “good baking apples.”

I’d begrudgingly resigned myself a life of tatin mediocrity when I spotted one of the most stunning ones I’d seen to date on a magazine stand. And I had a feeling I knew who had cooked/styled it — my across-the-street neighbor. Her name is Susan Spungen and she’s a cookbook author and food stylist and whether you realize it or not, you’ve probably admired her behind-the-scenes handiwork on movies — see: that croissant scene in It’s Complicated, oh and everything Amy Adams and Meryl Streep cooked in Julie & Julia. It was on the latter project that she got very, very good at apple tarte tatins. She explains “It was a quick shot, but I worked hard to get the right look and technique, so I could make it over and over again, and have it look exactly the same each time, which is essential for a movie scene.”

I invited myself over and watched her make one in her tiny kitchen, not even breaking a sweat, and it was perfect. I thought it would fill me with the confidence I needed to replicate it at home. But two years later, it had not. So, this fall, I asked her to come to my place this time, I took 200 pictures and almost as many notes. I then made four more without her and all except the one I made with what turned out to be the wrong apples, looked exactly like hers. With this I knew it was time to write what I hope will be the last tarte tatin recipe you’ll ever need.

Here are a few things I learned from watching a professional, and basically making five tatins in two weeks:

1. The type of apple matters. You need one that holds its shape after it bakes. The internet is full of lists of “good baking apples” and “bad” baking apples and I cannot tell you which one will never lead you astray because there’s (believe it or not) a limit to my madness and I won’t be testing any recipe with every variety of apple. However, I was crazy enough to audition four here. I homed in on ones that I can buy at both grocery stores and local greenmarkets right now: Pink Lady, Fuji, Gala, and Granny Smiths. The first three worked great; the last one fell to mush. It may be because it was from a grocery store (I actually don’t find them at markets much) where they’re often very, very old, or maybe it’s just that they’re all wrong for this recipe. I don’t think it’s worth the risk to find out. If you make it with another kind with success, shout it out (and whether it procured locally or from a grocery store) in the comments. 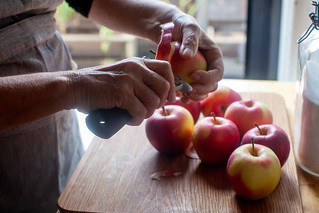 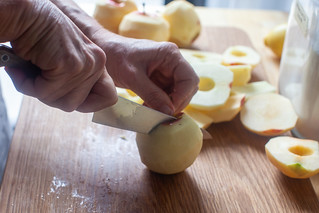 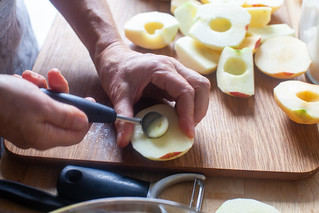 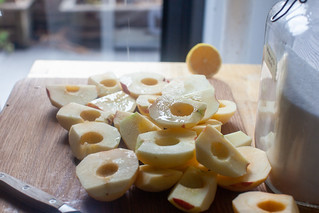 2. You don’t need to cut them all crazy. I see recipes that call for halves (too big), quarters (too small), and some that call for thirds, which is about right but there’s no need to do exacting knife work to get every piece to be the same size, even if you have the patience to make finicky apple cuts. I’m using three sizes — a little less than half, a third, and about one-quarter in each that you see here — and cut them the way you would if you were snacking on an apple: imperfect and easy. A mix of sizes and shapes fits better.

3. Apples shrink a lot when they cook. If you’ve ever wondered why so many apples are called for in a 9- to 10-inch round tart, this is why. If you’ve ever made one and really thought you crammed the fruit in, only to have a tatin that looked like sparse apple cobble stones, ditto. It means that when you nestle the apples against each other before you bake it, you want each to lean onto the one behind it, overlapping it by one-third, so as it shrinks in the oven, they’re still tightly snugged together. 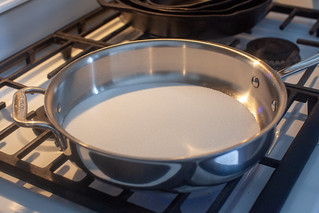 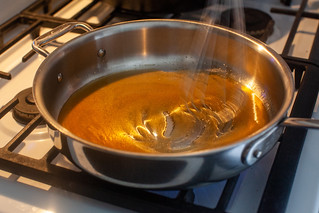 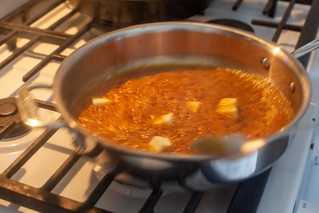 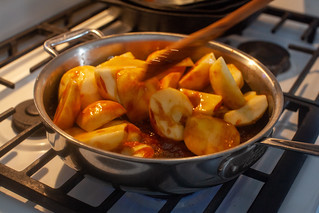 4. Three-quarters of the apple-cooking is done on the stove in the caramel; the rest happens in the oven. When the pastry is nicely browned and crisp, it’s done. This means that if the sautéed apples aren’t mostly cooked, that they’re still crunchy inside, it needs more time on the stove before it goes in the oven or the baked tatin won’t have perfectly tender apples. 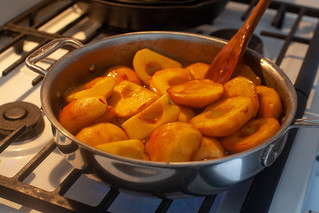 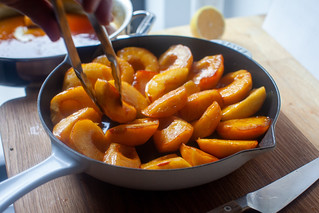 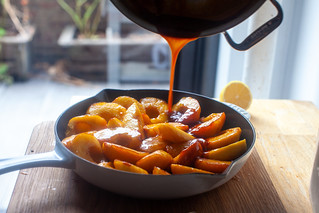 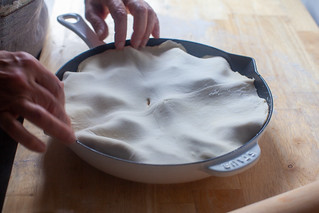 5. Because of #3 and #4, you really want to use two pans make your tatin. Trust me — a person who will go to almost any length not to dirty two dishes when she could only dirty one — when I say that this is a place where it is unequivocally worth it. Almost every apple tarte tatin recipe makes life unnecessarily difficult by having you do the stovetop component (making the caramel and cooking the apples in it) in the same small pan as you’d might bake your final tart. Just look how many apples end up in the final tart, and that’s after they’ve shrunk. It’s very hard to cook the not-yet-shrunk apples evenly in caramel in a small pan. It’s much easier and will give you more consistent results if you use a big skillet. Then, arrange the apples exactly the way you want them in a smaller ovenproof skillet or standard pie pan. (And, it cools the apple mixture down a bit, essential because you don’t want to melt the butter in your pastry before it gets in the oven.)

6. Almost every apple tarte tatin recipe, including my previous ones, tells you to flip it out of the pan too soon. Give it time for the caramel and cooked apple juices to thicken up a bit. I found a minimum of 30 minutes and up to 60 worked well. It’s not ruined if you flip it sooner, but the caramel will be thinner and more likely to run off and puddle. 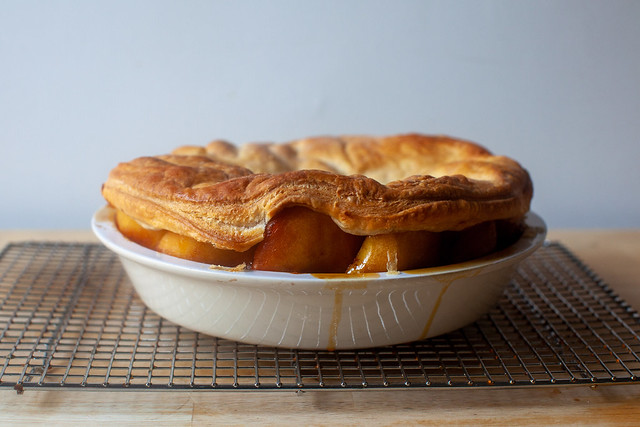 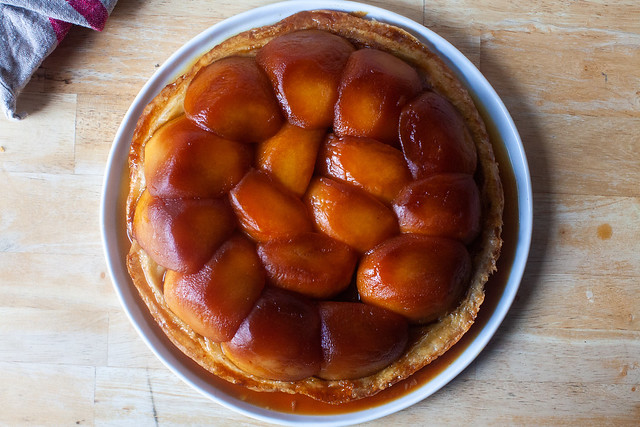 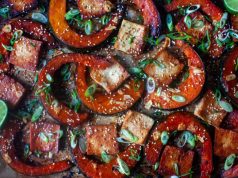 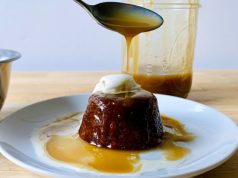 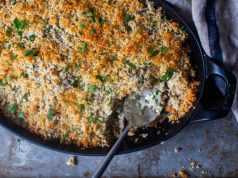 Less-is-More Bodybuilding for Lifters of All Ages…