Looking for a simple brain boosting regimen? While there are dozens of nutrients that support brain health, omega-3 fatty acids and lecithin have withstood the test of time. Let’s explore the research behind these cognition promoters and how they make a powerful partnership. 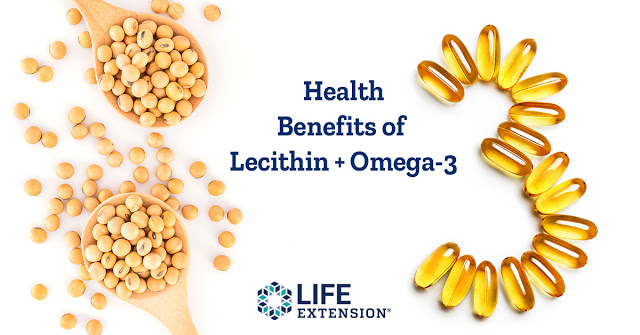 The list of compounds that help support brain function is impressive.1-21 And this list only provides some of the more well known among the hundreds that have been or are being investigated in regard to their benefit to cognition.

Lecithin has been a nutritional staple for decades. However, it’s come a long way from the baggie of sticky yellow granules sitting next to the brewer’s yeast on the shelf of your local health food store.

Choline, which is contained in phosphatidylcholine, is a component of the neurotransmitter acetylcholine, which facilitates the transmission of impulses between neurons, enabling the body’s nerves to carry messages. By supplementing with lecithin and/or choline, one ensures that an adequate amount of choline is present for optimal acetylcholine production. Enhancement of acetylcholine production and its action is one means of improving cognitive function and, although it is not a cure, one method of treatment for neurodegenerative diseases involves acetylcholinesterase-inhibiting drugs that reduce the neurotransmitter’s breakdown.

Lecithin is often used as an emulsifier to stabilize mixtures of oil in water and has been used in some omega-3 fatty acid preparations for this purpose.

Omega-3 fatty acids have benefitted humanity for as long as fish have been a source of nourishment. Since the latter part of the 18th century, physicians have dispensed cod liver oil for various conditions.25 Before it was known that fish oil contained vitamins A and D and omega-3 fatty acids, its health benefits were well known. Today, those who seek to benefit from fish oil’s properties prefer to get their omega-3 in the more palatable form of capsules that contain concentrated fish oil, providing significant amounts of the omega-3 polyunsaturated fatty acids eicosapentaenoic acid (EPA) and docosahexaenoic acid (DHA) which, like lecithin, form a part of the cell membranes of all tissues.26

There are similarities between some of the effects of lecithin and omega-3, namely brain function enhancement and supporting healthy lipid levels, which makes a combination of the two a natural choice.27-31

In light of an ability of choline to increase the availability of omega-3 fatty acids in the body, experiments were conducted in rats that compared the effects of diets that contained lecithin (providing a significant amount of phosphatidylcholine), DHA, lecithin plus DHA, or neither addition. Red blood cell and plasma levels of DHA and total omega-3 and -6, as well as plasma choline levels were measured after the animals had received the diets for two weeks. DHA in fish oil or vegetable algae alone increased EPA, DHA and total omega-3 fatty acid levels while lowering omega 6 fatty acid levels in red blood cells and plasma in comparison with levels measured in the control group. Combining DHA and lecithin further improved the changes associated with DHA and increased plasma free choline. “Dietary DHA-containing oils and crude lecithin have synergistic effects on increasing plasma and red blood cell omega-3 polyunsaturated fatty acid levels, including DHA and EPA,” authors Nick van Wijk and colleagues concluded. “By increasing the systemic availability of dietary DHA, dietary lecithin may increase the efficacy of DHA supplementation when their intake is combined.”32

In another rodent study, egg yolk phospholipids that contained lecithin esterified with omega-3 and -6 fatty acids lowered blood pressure, serum inflammatory factors, heart rate and a marker of oxidative stress, suggesting their use in humans might be warranted.33

A review of DHA and EPA’s structural-functional synergies with cell membrane phospholipids noted that omega-3 phospholipid supplements that combine DHA/EPA with phospholipids in the same molecule demonstrated significant promise in early trials. As examples, phosphatidylserine attached to DHA/EPA has alleviated attention deficit hyperactivity disorder (ADHD) symptoms, krill omega-3 phospholipids that contain mostly phosphatidylcholine with DHA/EPA attached were associated with better results than conventional fish oil in trials that evaluated their use in premenstrual syndrome/dysmenorrhea and abnormal blood lipids and, in another trial, krill omega-3 phospholipids showed anti-inflammatory activity. “Utilizing DHA and EPA together with phospholipids and membrane antioxidants to achieve a triple cell membrane synergy may further diversify their currently wide range of clinical applications,” concluded author and dietary supplement expert Parris M. Kidd of the University of California, Berkeley.34

Phospholipids have been added to nutritional supplements to enhance the absorption of ingredients other than omega-3. This and more indicates a growing awareness of the use of lecithin or its component phospholipids to enhance nutrient bioavailability.

Supplementing with lecithin and omega-3 fatty acids not only offers benefit to the brain, but research shows that these nutrients work synergistically when taken together to achieve superior results.