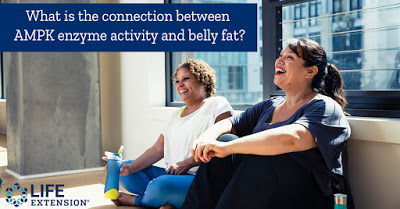 Does AMPK help with belly fat? The short answer: evidence indicates that it may help. For the long answer, read on. The dangers of excess belly fat and other adipose tissue could be reduced by increasing the activity of an enzyme known as AMPK.

AMPK (AMP-activated protein kinase) is an enzyme composed of three protein subunits that are produced by most cells in the body. It serves as an energy-sensing switch that informs the cells when to store energy and generate energy-containing molecules such as fat, and when to break down existing energy stores. AMPK signaling declines during aging.1

How can we activate AMPK?

Calorie restriction, a life-extending practice that involves periodic fasting or consuming fewer calories, has been shown to activate AMPK.2 In turn, AMPK inhibits the activity of mechanistic target of rapamycin (mTOR), an enzyme that represses autophagy (a process that eliminates damaged cells).3

While calorie restriction has the most widely studied and successful way to extend life in a variety of animal species, it requires long term commitment and a significant amount of self-discipline to work in humans.

However, specific nutrients have been identified that indirectly activate AMPK. Here’s a partial list:4-12 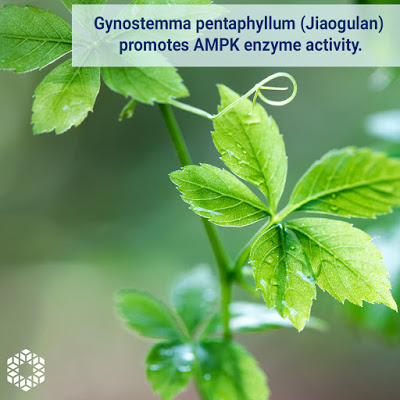 Additionally, the biguanide antidiabetic drug metformin, which is a synthetic derivative of the plant Galega officinalis, and thiazolidinediones, another class of insulin-sensitizing drugs, are indirect AMPK activators.13,14

Direct AMPK activators include lesser known compounds that are not as readily available, with the exception of salicylate, a compound derived from willow bark from which aspirin is derived.15

Any agent or regimen that reduces body fat in general will also reduce fat around the abdominal area.

A study of morbidly obese people found lower AMPK activity in visceral fat that surrounds the abdominal organs compared to subcutaneous abdominal fat tissue that resides under the skin, and that inflammatory gene expression was higher in visceral fat tissue.16 An even greater association existed among insulin resistant subjects.

In a trial that involved 75 men and women with a high body mass index, supplementation with the AMPK activator hesperidin with or without caffeine for 12 weeks resulted in decreases in visceral fat area, subcutaneous fat area and their sum total abdominal fat area, while the placebo group experienced gains. Subcutaneous abdominal fat was reduced to a greater extent than visceral fat, which is more closely associated with metabolic disease. However, the authors noted that “Visceral adipose tissue has been proposed to mediate obesity-related unfavorable levels of insulin, glucose and lipids, but subcutaneous abdominal adipose tissue has been shown to be an independent risk factor for the metabolic complications of obesity.”17

Animal research has confirmed that the administration of AMPK activators, including green tea, the diabetes drug liraglutide, dioscin from wild yam, and resveratrol decreased abdominal fat.18-21

Cushing’s syndrome occurs when people are exposed to high amounts of the hormone cortisol for prolonged periods and can be the result of excessive cortisol production by the adrenal glands or the use of corticosteroid drugs. Characteristics of Cushing’s syndrome include abdominal obesity accompanied by insulin resistance and abnormal lipid levels. A study involving Cushing syndrome patients who had adrenal gland surgery revealed 70% lower AMPK activity in visceral adipose tissue in comparison with a group of matched control patients with adrenal tumors that were not associated with excess cortisol release and another group of control patients. “Our recent data in human adipocytes show that metformin reverses the inhibitory effects of corticosteroids on AMPK, suggesting that metformin and glucocorticoids influence the AMPK signaling pathway in opposite ways and that metformin is able to override the effect of glucocorticoids on this enzyme,” writes Blerina Kola and colleagues of Barts and the London School of Medicine and Dentistry. “This suggests that metformin or novel tissue-specific AMPK activators could be beneficial in the prevention or treatment of the deleterious metabolic consequences, especially the accumulation of the disadvantageous visceral adipose tissue, in patients with endogenous or iatrogenic Cushing’s syndrome.”22

While these studies indicate that AMPK has specific effects on abdominal fat, a clinical trial that involved 80 obese subjects provided further evidence. Participants who received an extract of the AMPK activating herb Gynostemma pentaphyllum for 12 weeks lost an average of 20.9 square cm in total abdominal fat area in comparison with a loss of 2.87 square cm in the placebo group. Visceral abdominal fat loss was greater than subcutaneous fat loss.23

For those who have noticed an increase in stubborn abdominal fat over the years, the addition of an AMPK-activating compound to a healthy eating regimen may be worth a trial. These compounds have other positive health effects that will make their inclusion in a nutritional supplement program of value to the entire body for years to come. 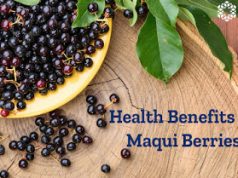 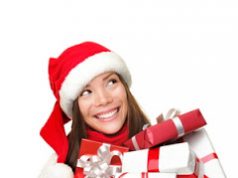 Healthy Gifts that Keep on Giving…

What I Eat In A Day | High Protein Vegan Meals…

Ask the Ripped Dude: How Do I Avoid Packing on Unwanted...