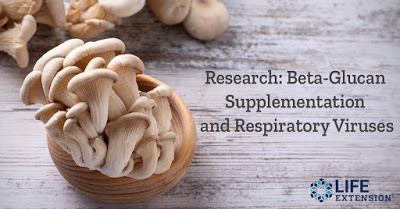 It’s hard to avoid exposure to influenza and other respiratory viruses, which emphasizes the importance of a healthy immune system. A nutritious diet, consisting of a balance of protein, carbohydrates and healthy fats, plenty of plant foods and low amounts of added sugar can help. Beta-glucans have a variety of positive health effects when consumed, the most prominent being that of supporting immune function. Several foods contain beta-glucans; however, these foods aren’t always consumed on a regular basis. To help boost the immune system year-round, many people rely on beta-glucan supplements to help prevent the flu or to treat its symptoms.

Beta-glucans are carbohydrate molecules known as polysaccharides that exist in the cell wall of some foods. Beta-glucans from different sources vary in their molecular structure. Hence, the difference in their nomenclature, i.e., (1,3) (1,4) (1,6) glucans.

Preclinical and human research has found a benefit for beta-glucans against flu symptoms. In mice, oral administration of alpha and beta-glucans derived from maitake, shiitake, reishi, agaricus and chaga mushrooms for two weeks improved outcomes following H5N1 influenza infection. The researchers concluded that the better outcomes among mice that received the beta-glucan mixtures were due to enhanced cellular and humoral immune responses, which resulted in a lower viral load.1 Twelve days after being infected, all of the mice that did not receive glucans had died, yet 60% of treated mice were alive. Treated animals also showed less temperature elevation and weight loss compared with the control group of animals.

In another mouse study, a variety of algae (Euglena gracilis Z) or its component beta glucan were given to mice for two weeks after which the animals were infected with influenza. A control group of infected mice received no additional treatment. Both treated groups had higher survival rates and lower virus titers in the lungs. The authors suggest that the microalgae and the beta-glucan it contains “can eliminate the influenza virus via the activity of beta-1, 3-glucans on dendritic cells and induction of CD8+ T cells and/or natural killer cells.”2

In piglets infected with swine flu, beta-glucan derived from the yeast Saccharomyces cerevisiae decreased pulmonary lesions and viral replication rate compared with infected animals that received a control substance.3 “These findings support the potential application of beta-glucan as prophylactic/treatment agent in influenza virus infection,” the authors of the report concluded.

The effects of stress on immune function are well known. In a study of women who experienced moderate psychological stress levels, daily supplementation with Saccharomyces cerevisiae-derived beta-glucan for 12 weeks was associated with fewer upper respiratory tract symptoms along with improved overall well-being and energy levels in comparison with a placebo.4 In men and women undergoing intense exercise stress, supplementation with beta-glucan derived from Saccharomyces cerevisiae was associated with a 37% reduction in the number of days during which cold or flu symptoms were reported compared to a placebo.5

Beta-glucans have a number of diverse health effects including:8

Notice that the top six effects on the list all involve immune support, which may be beta-glucans’ best-known benefit.

In a 2007 review, European researchers noted that the healing and immunostimulatory properties of certain mushrooms have been known for thousands of years and that these mushrooms contain beta-glucans.9 Beta-glucans improve host immune defense by activating part of the innate immune system known as the complement system, and enhancing macrophage and natural killer cell function. They protect against the initiation of tumors by carcinogens and can also inhibit tumor growth and metastasis.

The immune-supportive benefits of beta-glucans derived from Saccharomyces cerevisiae was validated by a clinical trial conducted in Germany which found a 25% reduction in the risk of acquiring a common cold and better sleep during cold episodes among participants who received beta-glucan in comparison with a placebo. “This is in line with a recently published trial demonstrating the prophylactic effect of the same yeast (1,3)-(1,6)-beta-glucan preparation on the incidence and severity of common cold infections,” the authors of the report wrote. “Since the susceptibility to get a common cold is closely related to the body’s immune status, both studies independently suggest the potential of yeast (1,3)-(1,6)-beta-glucan to stimulate the host immune system in order to provide defense against common cold viral attacks.”10

Beta-glucans are found in: 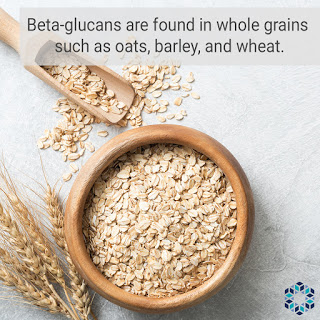 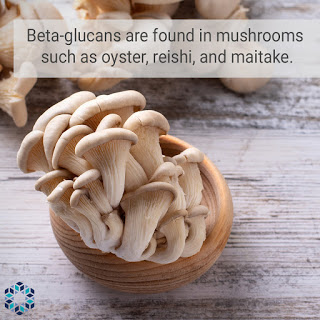 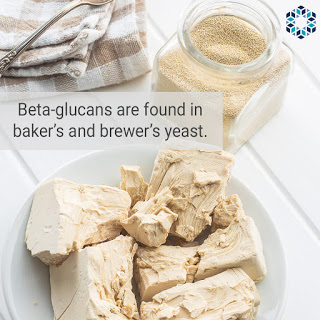 The use of beta-glucans supplements appears to be safe. Due to the beneficial effect of beta-glucans in lowering blood glucose among diabetics, it has been suggested that individuals being treated for diabetes or who have hypoglycemia be aware of this potential effect.12

It has been noted that specific glucan preparations have received Generally Recognized as Safe status and have been accepted as novel food ingredients by the European Food Safety Authority.13 An evaluation of the potential toxicity of varying doses of beta glucans in rats found no adverse effects on general condition and behavior, growth, feed and water consumption, red blood cell and clotting factors, clinical chemistry values, organ weights and other changes to any organ evaluated after 28 days. “Results of this study demonstrated that consumption of concentrated barley beta-glucan was not associated with any obvious signs of toxicity in Wistar rats even following consumption of large quantities,” the authors of the report concluded.14

Trials of beta-glucan in elderly participants and in infants resulted in no adverse effects.15,16

Doses used in trials vary widely, from weekly milligram increments to daily amounts of several grams. As a reasonable daily health maintenance dose, 100 to 600 milligrams per day of beta-glucan may be all that’s needed. One’s health care provider may consider higher doses in the event of active flu or other upper respiratory infections.