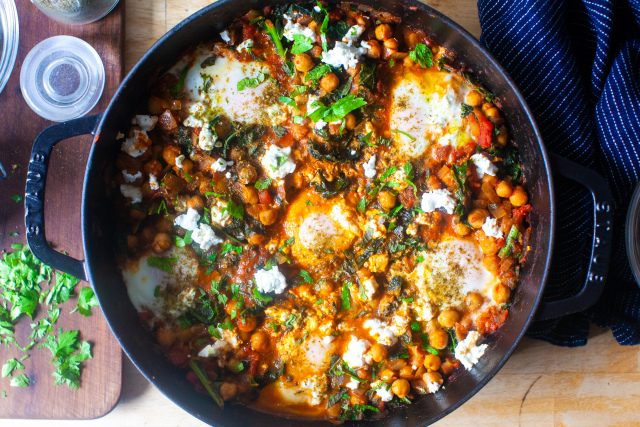 Make the stew portion whenever time permits — I would even expect it to freeze well — then rewarm it on the stove and drop in eggs closer to when you’re ready to eat it. I’ve omitted the oven step in this recipe, because I found (mostly by forgetting to read the recipe) that it cooks just fine on the stove.

In a large, deep frying pan or low Dutch oven* casserole dish, heat a glug (1 to 2 tablespoons) olive oil over medium heat and, once, add the onion, garlic, spices, and jalapeño and cook for 4 to 5 minutes, until transluscent. Add the tomatoes and stock plus 1 teaspoon kosher salt and several grinds of black pepper and stir to combine, bringing the mixture to a simmer, lowering the heat if necessary to keep it from bubbling too hard. Cover with a lid and cook for 5 to 7 minutes, until the sauce has thickened slightly. Add kale and cover again, cooking until the greens have wilted, 2 to 4 minutes. Adjust seasoning if needed. Make wells for eggs and break an egg into each. Sprinkle eggs with additional salt and pepper, and whole dishw ith feta. Cover and simmer for 6 to 10 minutes, until the whites are set but the yolks are runny.**

To serve, drizzle with olive oil, sprinkle with za’atar and mint, and serve with pita wedges and plain yogurt, if you wish.

* I’m using this pot, the pan that’s gotten the most use in my kitchen for the last five years.

** The trickiest part of any baked egg dish is getting the eggs exactly right, neither undercooked or hard-boiled. I vote for checking them as often as needed and rotating the pan as needed to avoid a hot spot ruining a single egg. Most importantly, ask yourself: Am I eating this the second it comes off the stove or 10 or even 20 minutes later? If so, you can take them off ever-so-slightly wiggly in the whites because they’ll continue to set as the pan rests. new classic wedding cake + how to…