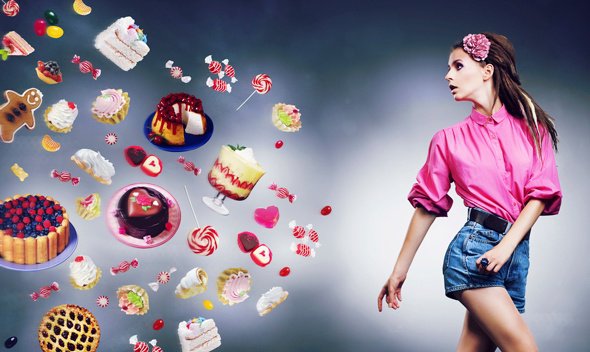 High-fructose corn syrup (HFCS) is a sweetener made from corn starch.

It has a similar chemical composition and effect on the body as table sugar.

HFCS is commonly used because it’s very cheap, particularly in the US.

While many people say HFCS is worse than sugar, there is currently no evidence to suggest that one is worse than the other. They are both unhealthy.

Excessive consumption of HFCS has been linked to several health problems, including obesity and type 2 diabetes (1, 2, 3, 4, 5).

Unfortunately, it can be difficult to avoid. It’s commonly added to foods, even some you may think are healthy.

Here is a list of 20 popular foods that often contain high-fructose corn syrup.

Soda is well known for its high sugar content. In fact, it’s the largest source of added sugar in the American diet (6, 7).

One 12-ounce can of soda can contain close to 50 grams of added sugar. That’s 13 teaspoons, which exceeds the daily limit of nine teaspoons of sugar for men and six for women (8).

No matter how it gets sweetened, sugary soda is not a healthy beverage. Its high sugar content contributes to obesity and diabetes (6).

A great substitute for sugary soda is sparkling water. Many brands are naturally flavored with fruit and do not have any calories or added sugar.

Candy and candy bars are mostly made of sugar.

Several brands add it in the form of HFCS, and it’s often listed as the first ingredient.

Yogurt is often advertised as a healthy snack.

Companies claim that it’s low-calorie, nutrient-dense and high in probiotics.

While it certainly can be healthy, several brands of yogurt, especially low-fat and fat-free yogurts, are nothing but sugar bombs.

For example, a single serving of some flavored, low-fat yogurts contains over 40 grams of sugar, which surpasses the daily limit (9).

Furthermore, HFCS is often the sweetener of choice for these types of yogurts.

Instead of buying yogurt with added HFCS, opt for plain yogurt and add your own flavorings. Vanilla extract, cinnamon, cocoa powder and berries are great options.

It is important to always be skeptical of store-bought salad dressings, especially those advertised as low-calorie or fat-free.

To make up for the flavor that gets removed along with the fat, companies add sugar or HFCS to please your taste buds.

Just one tablespoon of fat-free French dressing contains three grams of sugar. Most people add much more than a tablespoon of dressing and could easily consume more than half of the daily limit of sugar in a single salad (10).

Your best bet is to make your own salad dressing with simple, healthy ingredients, such as olive oil, balsamic vinegar and lemon juice. 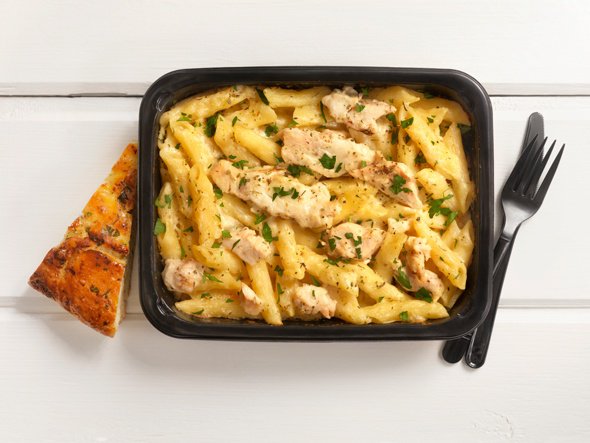 Many healthy foods, such as fruits and vegetables, can be purchased frozen.

However, frozen convenience foods, such as TV dinners and pizzas, have taken over grocery store aisles.

You wouldn’t expect these foods to contain added sugar, but many of them do in the form of HFCS.

When shopping the frozen aisles, always check ingredient lists and choose foods without HFCS and other unhealthy ingredients.

It is always important to double check ingredient lists on bread labels.

Many brands have added high-fructose corn syrup, which can be surprising because bread isn’t usually thought of as a sweet food.

Canned fruit is peeled and preserved, a process that strips the fruit of its healthy fiber.

Just one cup of canned fruit can contain up to 44 grams of sugar, which is over twice the amount found in a cup of whole, fresh fruit (11, 12).

To avoid HFCS, always choose fruit that is canned in its natural juice. Better yet, choose whole fruit so you don’t have to worry about any added ingredients. 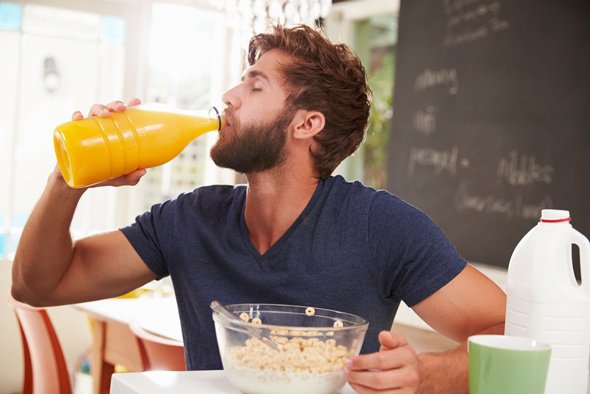 Juice is one of the biggest sources of sugar in the American diet, especially among children (13, 14).

While juice provides some nutrients and antioxidants, it’s a very concentrated source of sugar with little fiber.

Although juice is naturally high in sugar, some companies sweeten it even more with HFCS.

The amount of sugar in some juices is comparable to the amount added to soda. Some types of juice might even contain more sugar than soda (15, 16).

It’s best to choose whole fruit to limit your intake of sugar.

Boxed dinners, such as macaroni and cheese, often become a dietary staple due to their convenience.

These types of meals come in a box along with packages of powdered sauce and seasonings. You just need to add a couple of ingredients, such as water or milk, and cook it for a short period of time.

HFCS is often added to these products, along with many other artificial ingredients. You are much better off cooking a quick meal for yourself with real food ingredients.

Granola consists of rolled oats combined with various other ingredients, such as dried fruit and nuts.

This combination of ingredients can be baked and formed into a popular snack item known as granola bars.

Granola bars tend to be very sweet, as many companies choose to sweeten them with sugar or HFCS.

The amounts of added sugar in many granola bars are similar to the amounts found in some candy bars.

For example, one ounce of a seemingly healthy granola bar contains more sugar than a candy bar (17, 18).

The good news is that there are plenty of brands that sweeten their bars naturally. Always check the ingredients lists.

Cereal is a popular and convenient breakfast food.

Many cereals are advertised as healthy, but they are often heavily sweetened with sugar or HFCS.

In fact, there are several cereals that contain more added sweeteners than many types of dessert.

Some brands contain over 10 grams of sugar in only one serving. It’s easy for some people to eat more than the listed serving size, which can put them over their daily sugar limit right at their first meal of the day (19, 20, 21).

Find a cereal without any added sugar or HFCS, or replace it with an even healthier option, such as oatmeal. 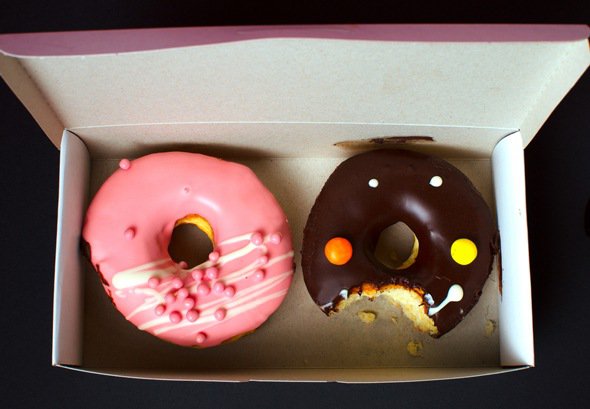 Many grocery stores have their own bakery sections with endless donuts, cookies and cakes.

Unfortunately, HFCS is the sweetener of choice for many store-bought baked goods.

Sauces and condiments can seem like an innocent way to add flavor and texture to your meal.

However, this isn’t always the case. Many of these products have HFCS listed as the first ingredient.

Two items to be particularly cautious of are ketchup and barbecue sauce.

Always check ingredient lists for HFCS, and choose the brand with the least amount of sugar. Also, be sure to watch your portion sizes with condiments.

Processed foods, such as chips, cookies and crackers, contain HFCS more often than not.

However, there are healthier brands available — you just have to look for those without added sweeteners.

Cereal bars are a popular, quick and easy snack food. They may seem like a healthy choice for an on-the-go breakfast.

However, like other types of “bars,” cereal bars tend to be high in added sugar, often in the form of HFCS.

Always check ingredient lists and choose a brand without added sugar. Or, rethink your breakfast and eat something healthier in the morning.

Nutrition bars, also known as “energy bars” or “health bars,” consist of high-energy ingredients and are meant to be supplemental.

They are marketed as meal replacements for individuals who do not have time for a meal but need energy quickly, such as athletes.

Unfortunately, HFCS is added to these quite often, which once again stresses the importance of always checking ingredient lists.

The good news is that there are some brands that use only whole-food ingredients, and you can also make your own.

Coffee creamer seems harmless until you see the ingredients that get added to it.

It’s typically made mostly of sugar in the form of HFCS, in addition to several other unhealthy ingredients.

You are much better off drinking your coffee black or flavoring it with something healthier, such as milk, unsweetened almond milk, vanilla or a little heavy cream. 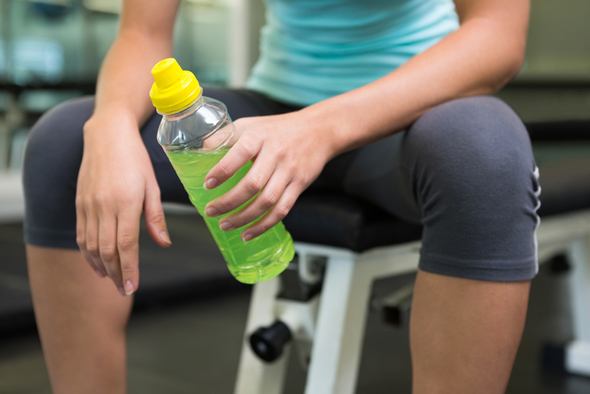 These types of beverages often seem like a hydrating quick fix to recover from a workout or energy slump.

But don’t be fooled, as they are typically rich in HFCS and other ingredients that will do your body more harm than good.

Water is a much healthier beverage choice, as it will increase your energy levels and quench your thirst without making you crash.

Jam and jelly are always rich in sugar, but store-bought versions are more likely to contain HFCS.

If you want to enjoy these condiments, look for a version with simple ingredients.

You can often find locally made jams without HFCS at farmers markets and co-ops, or learn to make it on your own.

Ice cream is supposed to be sweet, so it is always high in sugar and meant to be consumed in moderation. Many brands choose to sweeten their ice cream with HFCS.

High-fructose corn syrup is an unhealthy ingredient that is added to all sorts of foods and beverages.

Unfortunately, many of these foods are often mistakenly assumed to be healthy. Nothing could be further from the truth. 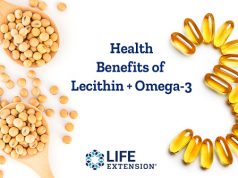 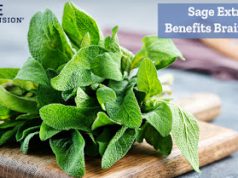 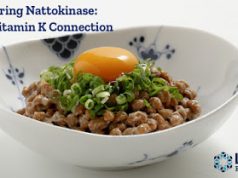